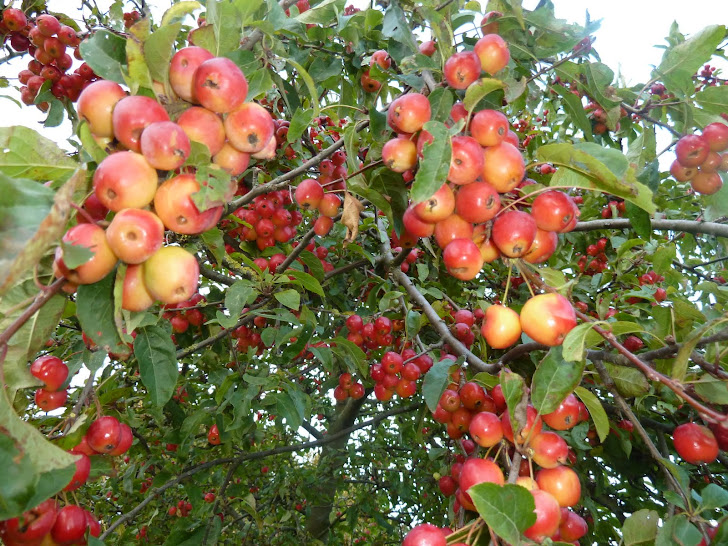 
It was in April when I bought a Multi pack of pea seeds, they were a bargain at 50p, I had planned to research  what kind of peas to plant and then make my decision based on crop, and taste, but at 50p how could I fail.

I planted the mange-tout  directly in to the ground on an extremely hot day in April in small blocks, as the instructions assured me that they needed minimal support. 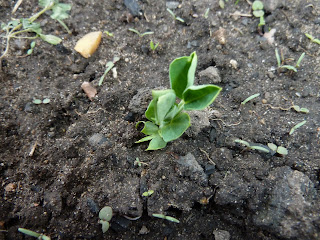 Within about 10 days the mange-tout had germinated.   And that’s it, no cloche, no netting or protecting,  the pigeons just don't seen interested. I have virtually ignored them, only to be rewarded by strong healthy plants and  masses of sweet delicious peas. 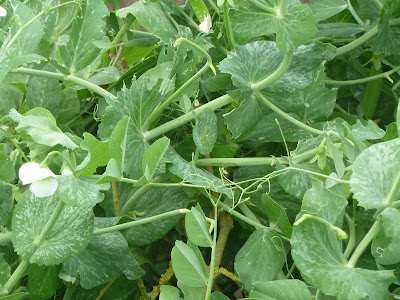 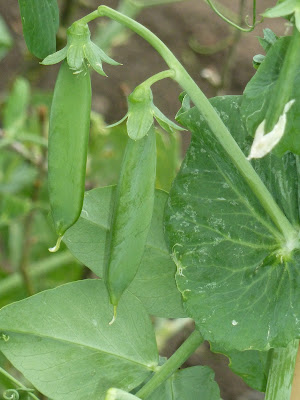 I was however mislead about minimal support. I should have put in a much better support system, rather than placing the twigs from a recently pruned tree near the pea shoots, as these proved totally  inadequate.
It doesn't really seem to matter because, although they look a bit of a tangled mess, the yield is still excellent and they just keep on coming.

I sowed the Early onwards a few weeks later, half the packet then the remaining  after 10 days.  This staggered planting hasn't made much difference as the weather was so appalling they germinated at the same time.  Again the plants have flourished, I supported these well from the beginning and I have a lovely tidy row of peas and the pods are plumping up nicely. 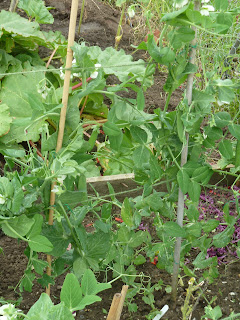 I have not bothered planting the Hurst Green Shaft as I anticipate have plenty of peas and only limited freezer space.


Mea culpe, Mea culpe.  It has been 8 months since my last blog.  No I haven’t  given up the allotment but during the winter months there seemed very little to do, or write about.

Of course that was when we had a mere 5 rods .
In January the neighbouring plot became available, a 15 rods complete with  Gooseberry bushes, Redcurrants ,Blackcurrants numerous Raspberries, a Rhubarb patch, an Apple tree, Asparagus and a Buddleia, which we will keep for the butterflies.  We had to take it, we'd be silly not to, but it had been left for quite a while and was very overgrown.  So we set to work immediately, weeding and digging, and although it was too late really we cut back the raspberry canes.  We only had a suspicion of where the Asparagus was so I felt rather like an Archaeologist excavating buried treasure.


When clearing away the canes that had supported last years Runner beans, I found dried up seed pods on the ground nearby, though the husks  looked brown and wizened, inside yielded gleaming white bean seeds. Magic beans ! 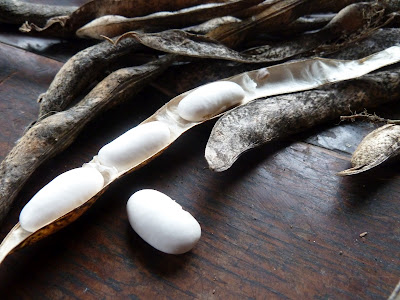 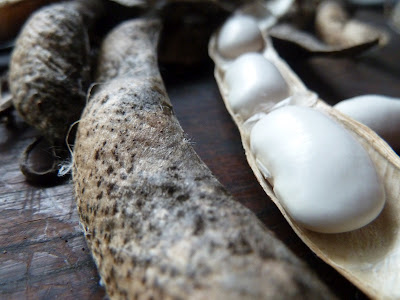 Well not quite magic, but free food. I planted all of them not really expecting much, but my pods have produced robust plants of what I think are Dwarf French Beans.

Please correct me if I'm wrong. 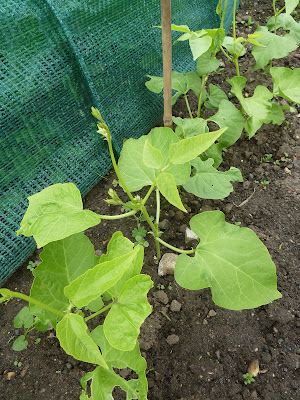 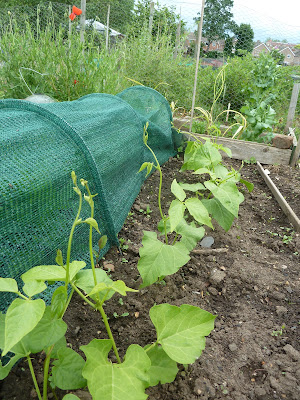 Seeing these plants thrive is indeed more satisfying than seeing my 'White Lady' Runner beans grow, I think purely because I had to buy them whereas my French Dwarf beans are gleaned from a previous harvest. Maybe it's just the circle of life thing, but I will be definitely be saving seeds now.

After the controversial, and may I say ground breaking decision to plant my Cauliflowers in a circle, (the circle signifying the head of the flower). I was not surprised that they were failing. 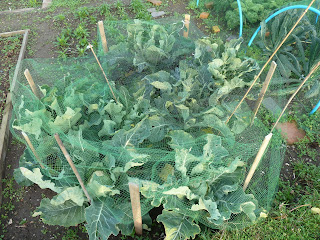 Apart from the planting I felt that I had done everything correctly.  I planted the plugs in moist soil and watered them well in, I had netted them straight away, to stop the greedy pigeons, and as we get very little rain in East Anglia I made sure they were never dry.
Despite all this devotion all I seemed to have grown was a mass of green leaves, I was actually wondering if you can cook them. 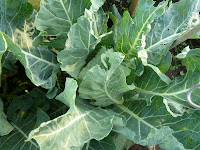 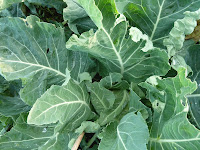 So I decided to remove the netting.  As I did this I pulled away some of the leaves, I was surprised to see the most perfect whitest Cauliflower head I have ever seen, I moved to the next plant and I actually squealed, another one just the same. It's hard to convey the absolute delight that I had in this discovery, most people on the allotment had told me they could be tricky so I think I had anticipated failure. 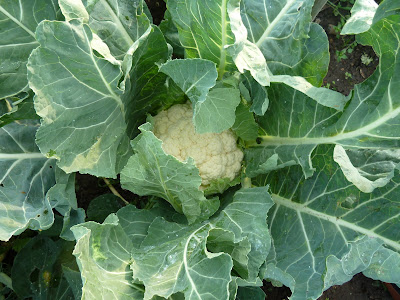 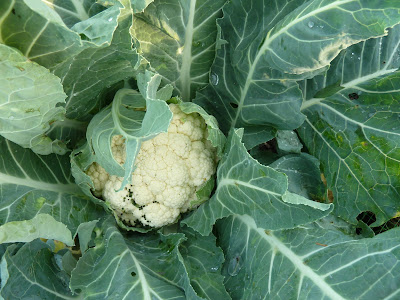 Buoyed by my success and dreaming of cheese sauce, I went to harvest the cauliflower.  It was at this point that I realised that I didn't know how to harvest a cauliflower. Do I pull up the whole plant, or do I just remove the flower? I walked around the allotments there was not a soul about, so I decided to ask on Twitter and sat all forlorn waiting for a response. @AllotmentMate, who Is a sort of allotment Superhero (not sure if he has a cape) came to my rescue, he very promptly tweeted Cut just below the Cauli taking a few leaves with it. 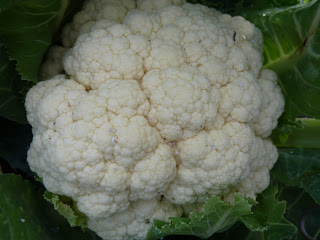 I did feel a bit of a fool, but it's always better to ask when you don't know, so thank you very much Ian.
I had also left the shed keys at home so was unable to get to the right tools for the job,  fortunately I had I pair of scissors and a nail file in my handbag so the beheaded was an old fashioned execution rather than the guillotine.
Everything we ate that night was  produced within a mile of our house, local Lamb, potatoes and Cauliflower cheese, very satisfying. 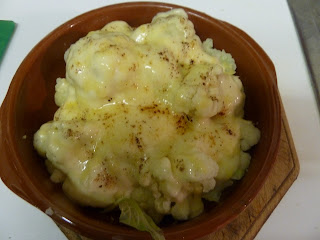 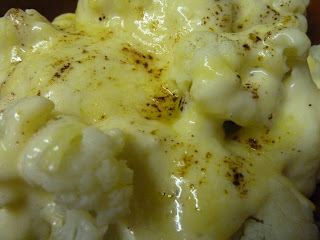 Fiona and I have started a tradition, and although it is only in it's infancy (2 years) I feel it will run and run. The annual picking of the crab-apple.
There are 5 crab-apples trees that Steve and I often admire whilst walking the dogs. Beautiful throughout the seasons, from their lovely blousy blossoms to the ruby red fruits that they display so amply now. 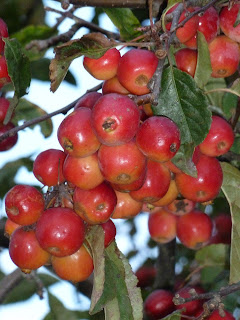 These trees are fully laden with the most glorious crab apples and it is such a shame to waste such 'gorgeousness' so Fiona and I took the short walk, me with the trugs and Fi with the more professional, and high fashion, harvesting bag which fits jauntily over the shoulder.
We harvested the fruit picking side by side talking about plants, flowers, food and books, and as always time slips sideways, and you suddenly realise that you have greedily picked more than enough, and carrying them home will be decidedly awkward. Its very odd but once we picked them they look as much yellow as red. 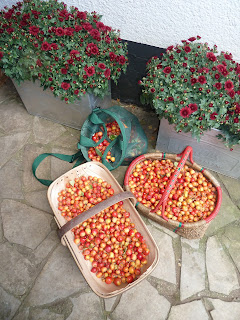 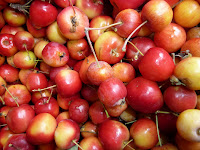 Getting the juice from the fruit is no longer the arduous task it once was, the Steam Juicer has dispensed with any need for muslin and waiting. That last sentence reads like an advert, I don't mean it to but it is such a fantastic utensil and saves so much time and mess that it is a wonder that more people don't have them.
The juicer uses gentle steam to open up the fruit cells, so that the juice drips into the juice pan which can then be used to make jellies or cordial. 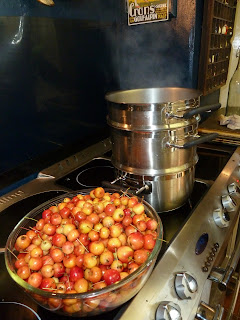 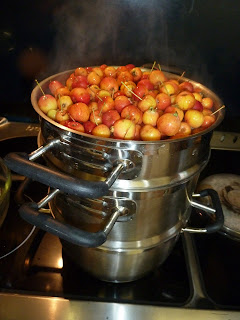 Fill the bottom pan with water and place on the hob to boil, the juice collecting pan fits snugly a-top, this is where the juice collects, add on the steamer basket with the washed fruit and then the lid, don't worry about pitting the fruit or removing stems there is no need. Once the pan is boiling it will take 40 to 70 mins, for the steam to puff up the fruit and release the juice which falls into the juice pot. 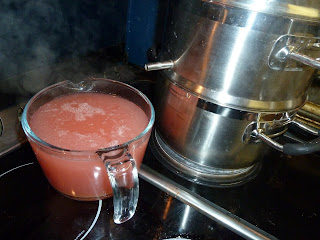 Once we had enough juice we could set about making the jelly (no pun intended).
We used Fiona's recipe of course and although she likes it hotter than me, I went along with the chilli to juice ratio which resulted in the most delicious Jelly, the sweet and hot is a perfect companion to cheese, cold cuts, and I even use it on my curry.
You can find the recipe here
http://www.cottagesmallholder.com/hot-crab-apple-and-chilli-jelly-recipe-2-470 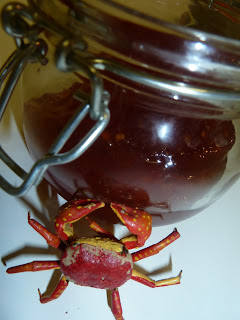 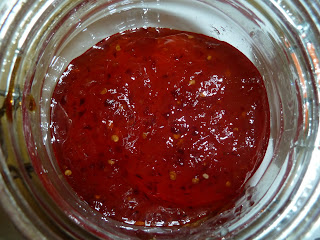 Weeding (will it ever end)

The definition of a weed is any plant that is, in our opinion growing in the wrong place. 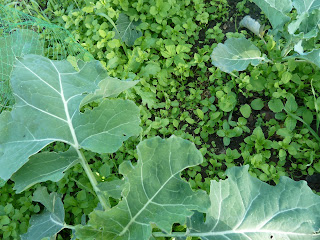 I honestly thought that come October the weeds would have stopped growing or at least slowed down, we have not weeded for a while and the weeds are smothering the soil. I'm not sure if this is usual,or if it's because of the mild weather we had recently. Whatever the case, I don't like it.
I am sort of tempted to spray something poisonous to get rid of them, I know that some of my fellow 'allotmenteers' embark on chemical warfare, but I will of course resist.  Organic growing isn't something that I really thought about,  but I have never used weed killer because it does not feel right. I want to try and do what comes naturally. 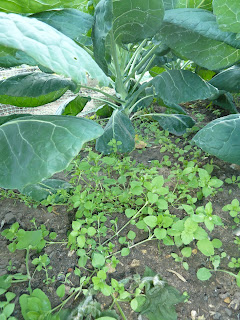 I do have an excellent tool for the job however, the Cape cod weeder.  It's a fantastic little device, it looks like little scythe.  The tool cuts the weeds below the surface on the forward and back stroke, I also turn it on it's side and with the point, nick out the weeds that have grown right next to the precious plants.
It does not come cheap however, I paid £17.99.  It's a De Witt tool and therefore extremely well made, and it was worth every penny as it makes short work of unwanted greenery, and does a really thorough job.
However I am still on the look out for a long handled weeding tool.  My friend said that she'd heard about something called a Swedish Hoe, so I Googled it.  This proved not to be a good idea as things of a dubious Swedish nature appeared.  If I had been looking for a hot tub with a Swedish lady my search would have been over immediately. Having inserted garden into the search, the response to Swedish Garden hoe was not much better, displaying only Dutch garden tools.  Friend rang up in a panic, said she'd got it wrong, it was a Hula Hoe (I didn’t choose to delve into why she got it wrong).
I have located one but it only has a short handle so I will have to be patient.
Weeding is quite therapeutic.  I think it is about seeing what needs doing, working methodically and looking back at what you've accomplished, even though it won't last.
And whilst you work listening to the birds singing, the leaves rustling and the occasional thud of an apple falling to the ground , today I had a Blackbird as a companion, a happy opportunist waiting for a juicy worm.
Even better than that I had my husband with me helping, and making tea.
Posted by Kitty at 00:13 6 comments: